I was taken aback by the woman’s poignancy as she described the public (and private) schools in her homeland of Korea. I’d been trying to think of a diplomatic way to describe many of the high-achieving school systems in Asia, but my new friend wasted no time mincing words.

My friend, who is a licensed teacher working on her second master’s degree in an education-related field, explained that she and her husband had elected to keep their daughter in a U.S. public school so that the junior high girl was not subjected to the testing-mania that is rampant in many Asian countries. Decisions like hers might come as a surprise to Americans, seeing as China, Korea, Japan, Taipei, Vietnam, and Singapore boast some of the highest standardized test scores on earth.

Our conversation caused me to search out my copy of Professor Yong Zhou’s fantastic book, Who’s Afraid of the Big Bad Dragon: Why China has the World’s Best (and Worst) Education System in the World. The irony Zhou notes is that while American education reformers are doing their best to catch up to the test scores of Asian schools (many of which have a narrowed curriculum that promote authoritarian values), Eastern educators are being pressured to mimic Western pedagogy (which promotes individualism, critical thinking, and creativity). 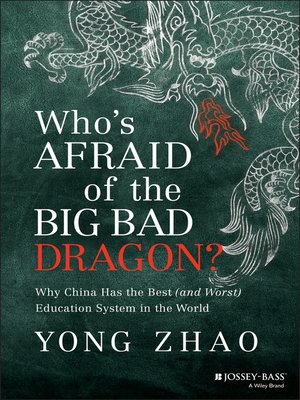 or in Western-style schools in China rather than keep them in “the world’s best education system.” Education has been widely recognized as the primary culprit for China’s lack of creative and innovative talent, and a major concern for China’s success in the future.

Keith Baker, former analyst for the U.S. Department of Education broke down the absurdity espoused by American education reformers in his Phi Delta Kappan article “Are International Tests Worth Anything?”:

For more than a quarter of a century, the American public has been barraged by politicians and pundits claiming that America’s schools are disaster zones because we are not at or near the top of the league standings in test scores. This claim is flat out wrong. It is wrong in fact, and it is wrong in theory. For almost 40 years, those who believe this fallacious theory have been leading the nation down the wrong path in education policy. It turns out that the elementary teachers who have said all along that there is more to education than what is reflected in test scores were right and the “experts” were wrong.

Tests are useful ways to gauge students’ understanding of specific material. However, education reformers who wish to put all the nation’s eggs into the standardized-testing basket are ignoring global trends as well as widely-accepted education and developmental theories.

What will you do to reverse the tide?

This is a text widget, which allows you to add text or HTML to your sidebar. You can use them to display text, links, images, HTML, or a combination of these. Edit them in the Widget section of the Customizer.
<span>%d</span> bloggers like this: